Please be advised that opinions shared in these "Resources" listed here do not necessarily reflect the opinions of those other than the authors themselves.
​
Some useful LINKS about sponsorship

Canadian Council for Refugees-
https://ccrweb.ca/en/myths-facts?fbclid=IwAR2BA6JpjCp6xbGEbeoGBW01KAEvn305cf2kUMhMRKqA_ZrMOkKudN4UKI
​
What some other sponsorship organizations do:

About refugee sponsorship in Vancouver
http://rcav.org/refugee-sponsorship-program-guidelines-and-faq/

Macleans Magazine: "Why It's Time for Canada to Grow Up":
http://www.macleans.ca/uncategorized/why-its-time-for-canada-to-grow-up/

An accounting of one Syrian's 9 month detainment in a Malasian airport while waiting to come here to Canada. He now lives in Whistler, B.C.
https://spark.adobe.com/page/HbVaGGfpFFQtn/


​VIDEOS (and Movies)
You may want to watch the weekly satellite t.v. series: "Bridging Borders" which is on weekly on Citytv Saskatchewan-(024) It offers half an hour of actual experiences of recent stories of refugees coming to Canada as the groups who sponsored them welcome them to their new country. https://www.citytv.com/saskatchewan/shows/bridging-borders/?fbclid=IwAR3gRH7LLlzbvESLmryuFy_sow86I0-HVb2XRlIOsR5XcupsinNoRR0vh7c

"Lion"- (2016)-"Accidentally separated from his family as a child, Saroo Brierley returns to India 25 years later to find them." Based on the memoir by Saroo Brierly

"The Good Lie" (2014)-"An employment counselor dedicates her life helping a group of Sudanese orphans to find jobs and adjust to their new lives in America."
"Sweetness in the Belly"-2019 film based on the book by the same name-starring Dakota Fanning-See book below under "Books".

A Hope More Powerful Than the Sea-The journey of Doaa Al Zamel-by Melissa Fleming ( One Refugee's Incredible Story of Love, Loss, and Survival-2017

In the Shadow of the Banyan: A Novel Kindle Edition
by Vaddey Ratner (Author)

Notes from My Travels: Visits with Refugees in Africa, Cambodia, Pakistan and EcuadorOct 1 2003
by Angelina Jolie

How to get the refuge in Canada: Guarantee to get asylum 95% [Print Replica] Kindle Edition
by Hoop Assa (Author)

All We Leave Behind author: Carol Off-a reporter's journey into the lives of others-This true story recounts the harrowing attempts to get an Afghan family to safety in Canada

Taking Flight: From War Orphan to Star Ballerina
by Michaela DePrince, Elaine DePrince (with) The extraordinary memoir of Michaela DePrince, a young dancer who escaped war-torn Sierra Leone for the rarefied heights of American ballet.

The Caged Virgin and Infidel-two books by Ayaan Hirsi Ali (2007)-Memoirs of her life story from her traditional Muslim childhood in Somalia, Saudi Arabia, Ethiopia and Kenya to her intellectual awakening and activism in the Netherlands and her current life under armed guard in the West. She was named one of Time Magazine's 100 most influential people of 2005, one of the "Glamour" heroes of 2005 and Reader's Digest's "European of the Year". She has also received numerous human rights awards.No Refuge for Women: The Tragic Fate of Syrian Refugees   (Creston Library)
Maria von Welser
Greystone Books Ltd, Sep 9, 2017 - Social Science - 296 pages
An exposé of the hidden suffering that over half of Syria’s refugees endure and the conflicts they continue to flee.
No refuge: this is the harsh reality encountered by the women and children who flee Syria in search of safety. When boatloads of Syrian refugees began arriving on European shores in the spring of 2015, Western television screens were filled with images of men. Where, journalist Maria von Welser asked herself, were the women and children, whom she knew made up over half the population of refugee camps?
In these pages, von Welser reveals the hidden stories of those Syrian women and children. There are stories of desperation and predation: loss of wealth and of life, child marriage, rape, kidnapping, and sex slavery. But there are also stories of empowerment and hope—including the conviction that we can turn compassion into real change.

Song of a Captive Bird-by Jasmin Darznik-2018-"A spellbinding debut novel about the trailblazing poet, Forugh Farrokhzad, who defied Iranian society to find her voice and her destiny. (Creston Library)

The Boat People-by Sharon Bala 2018-"The Boat People" is a "high-stakes novel that offers a deeply compassionate lens through which to view the current refugee crisis. Inspired by real events, with vivid scenes that move between the eerie beauty of northern Sri Lanka and combative refugee hearings in Vancouver, where life and death decisions are made, Sharon Bala's stunning debut is an unforgettable and necessary story of our times".  (Creston Library)

Don't Label Me-by Irshad Manji 2018-"studded with insights from epigenetics and epistemology, layered with the lessons of Bruce Lee, Ben Franklin and Audrey Lorde, punctuated with stories about Manji's own experiences as a refugee from Africa, a Muslim immigrant to the United States, and a professor of moral courage, "Con't Label Me" makes diversity great again." (Creston Library)
The Map of Salt and Stars-by Jennifer Zeynab Joukhadar (2018)-a novel-
"When a stray shell destroys Nour's house and almost takes her life, she and her family are forced to choose: stay and risk more violence or flee across seven countries of the Middle east and North Africa in search of safety along the very route Rawiya and her mapmaker took eight hundred years before in their quest to chart the known world.
(Creston Library)
The Boy on the Beach-by Tima Kuri-An intimate and poignant memoir about the family of Alan Kurdi—the young Syrian boy who became the global emblem for the desperate plight of millions of Syrian refugees—and of the many extraordinary journeys the Kurdis have taken, spanning countries and continents.
In Pursuit of Disobedient Women-A memoir of love, rebellion and family far away-by Dionne Searcey-The Times West African Bureau Chief takes her husband and young family in search of news to Nigeria to find the extraordinary struggles of the women she encounters. Written in 2020 (Creston Library)

Useful Terms in Sponsorship of Refugees
Below is a synopsis of the procedure entailed in sponsorship and Acronyms one may Encounter:
BVOR – Blended Visa Office Referred: a program designed to resettle Visa Office-Referred refugees through a cost- sharing arrangement between CIC, SAHs and their CGs.
CG – Constituent Group: a group authorized by a Sponsorship Agreement Holder (SAH) to act on its behalf in sponsoring refugees. A SAH can authorize any number of Constituent Groups (CGs) to sponsor under its agreement. Each SAH sets its own criteria for recognizing CGs
CIC – Citizenship and Immigration Canada
CPO-W – Centralized Processing Office Winnipeg: a CIC office launched in April 2012 which is responsible for in- Canada processing of overseas refugee sponsorship applications
GCMS – Global Case Management System: CIC’s single, integrated, and worldwide database system used internally to process applications for citizenship and immigration services.
IFH – Interim Federal Health Program: a health program established by the Government of Canada that provides temporary medical coverage for some refugees during the settlement period in Canada
IOM – International Organization for Migration: has the primary mandate to make arrangements for the organized transfer of foreign nationals, including refugees, displaced persons and other individuals in need of international migration services. It arranges transportation and medical examinations for refugees. The IOM provides an in-depth Canadian Orientation Abroad (COA) program on a contractual basis,
JAS – Joint Assistance Sponsorship: a joint undertaking by a Sponsorship Agreement Holder and one of its Constituent Groups and CIC to sponsor Government-Assisted Refugees requiring special assistance and whose admissibility depends upon this additional support to become established.
MARS – Major Acceleration of Refugees from Syria
MC – Matching Centre: the office located at CIC’s National Headquarters that is responsible for brokering between CIC offices located in Canada and Visa posts overseas regarding the destining and matching to sponsors of selected refugees who have been successfully processed and are ready to travel to Canada. The MC is also responsible for the destining of some Government-Assisted Refugees as well as coordinating NAT information
NAT – Notification (Notice) of Arrival Transmission: advises the local CIC and Service provider organization (in the case of GARs and JAS) and sponsors (in the case of PSRs, JAS and BVORs) of the date of arrival and flight details of the refugee, and of pertinent details such as the names of sponsors, onward travel arrangements to final destinations, and special needs (e.g., wheelchair required), etc. NATs are required to maintain accurate statistics and are sent for all refugees. They include: point of origin; port of entry; date of arrival; flight details; special requirements and identification of special programs such as OYW or blended initiative.
OYW – One Year Window Of Opportunity: a regulatory mechanism that allows non-accompanying family members to submit an application and be eligible to be processed in the same class and category as the principal applicant (PA) for up to one year following the PA’s arrival in Canada. All family members must be identified on the PA’s application form.
PA – Principal Applicant:: for a single applicant, it is that one person. For spouses, common law partners including those with children, it is the person with the strongest claim to persecution.
POE – Port Of Entry: legal point of entry into Canada, staffed by CBSA employees. Most POEs are at international airports, legal border crossing checkpoints with the United States and at lake and coastal seas ports
PSR – Private Sponsorship of Refugees Program RA – Refugee Advisor
RAP – Resettlement Assistance Program: a contribution program established by CIC that provides basic income support and essential services for refugees who have been admitted to Canada as Government-Assisted Refugees or under the Joint-Assistance Sponsorship program
RSTP – Refugee Sponsorship Training Program: a program funded by CIC whose primary mandate is to provide training and information on the private sponsorship of refugees to SAHs, CGs, cosponsors, Community Sponsors and G5s. Refer to www.rstp.ca for more information.
SAH – Sponsorship Agreement Holder: incorporated organizations that have signed a formal sponsorship agreement with Citizenship and Immigration Canada (CIC). Most current SAHs are religious organizations, ethno cultural groups or other humanitarian organizations. SAHs, which may be local, regional or national, assume overall responsibility for the management of sponsorships under their agreement. Organizations entering into a sponsorship
Secondary Migration: a refugee-initiated change in location on arrival in Canada, or during the period of the sponsorship, to a destination (city or province) other than the sponsoring community i.e. the one chosen during the selection process overseas
Sponsorship Breakdown: an official declaration that an irreparable failure to meet the sponsorship arrangements (care, lodging and settlement assistance) has occurred. Sponsorship breakdown is a condition of deterioration in the sponsor-refugee relationship such that the sponsor is unable or unwilling to fulfill the terms of the sponsorship undertaking. Normally, attempts are made to re-establish the sponsorship, but failing those efforts, CIC will formally declare a breakdown in the sponsorship and depending on the circumstances, the sponsoring group may be found in default.
UNHCR – United Nations High Commissioner for Refugees 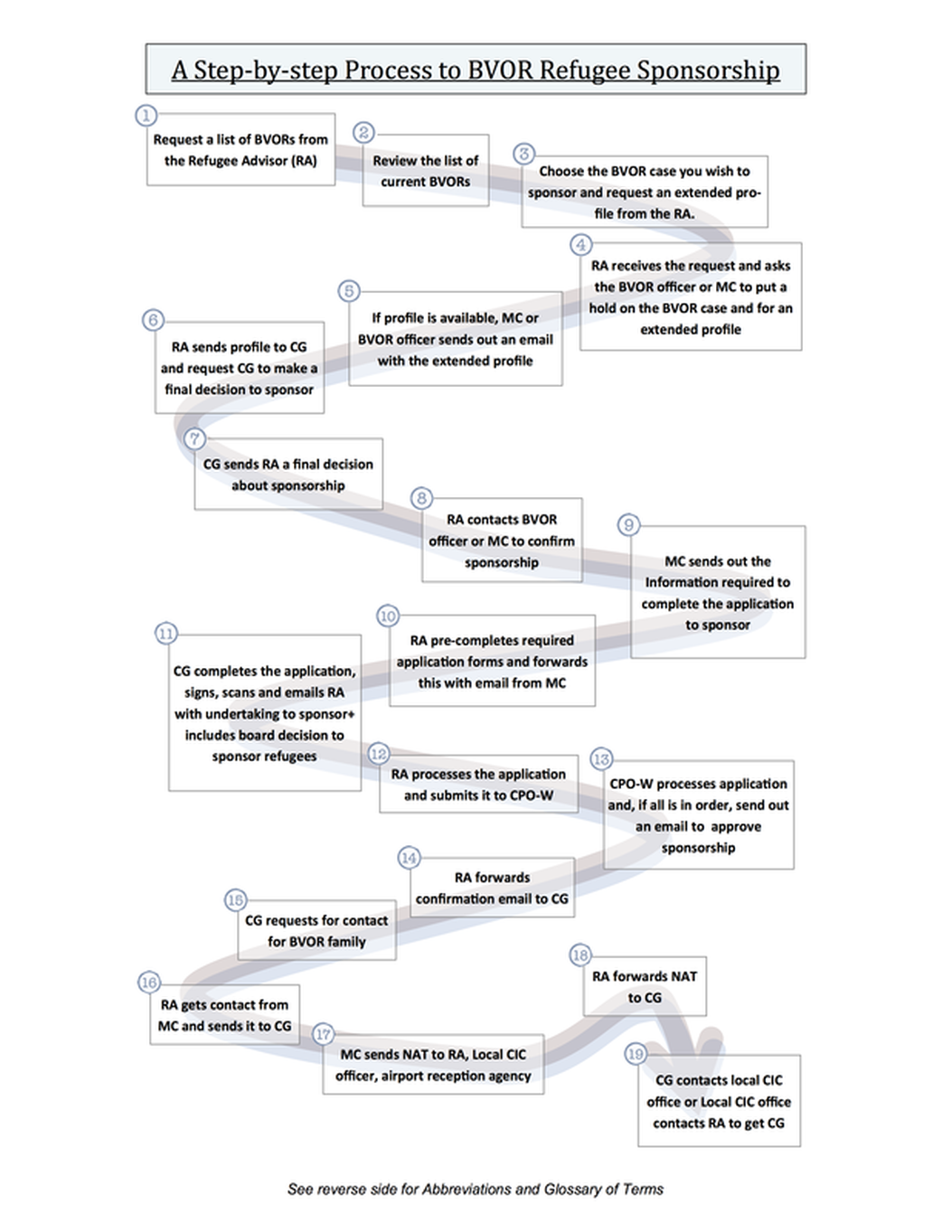